KSS is proactive and is involved with special operations with SAPS on a continuous basis. With the recent spike in crime, KSS is out there working with SAPS, community groups and community members. KSS Officers have also affected more arrests over the past 10 days.

Remember - Your security starts with YOU. What have you done and what measures have YOU taken in order to safe guard your home and business?

How vigilant are you really? Do you leave items in view from the road with doors and windows open? Are you working from home and have a laptop lying on the dining room table?

Please be aware – there is a lot of opportunistic crime where criminals are taking advantage of people being slack about their security while at home.

Technical advice
Do you have an electric fence and would like it monitored so that early warning activations can be responded to? KSS can do this for you.

Would you like CCTV cameras installed that also trigger an intruder alert? KSS can do this for you.

KSS Client Care
Please note that KSS caters for the individual and does not just blanket our clients under one monthly rate. KSS takes the following into account: If you are a pensioner, working full-time, a one-income household or if you have been retrenched or are struggling financially. KSS knows that everyone is different and circumstances change.

Where KSS had four (4) vehicles on the road, we now have eight (8) vehicles. KSS has the most vehicles and Response Officers in the Howick, Howick West, Merrivale, Merrivale Heights and surrounding areas, and back-up is never far away.

KSS Incidents 21 – 31 May 2020
21 May 2020 08:48 Sentinel Road (Howick) The KSS Control Room received a call about a break-in. A KSS Response unit was dispatched. The KSS Officers reported that the fence had been cut and the garage door forced open. The incident was formally reported to SAPS. A case was opened. 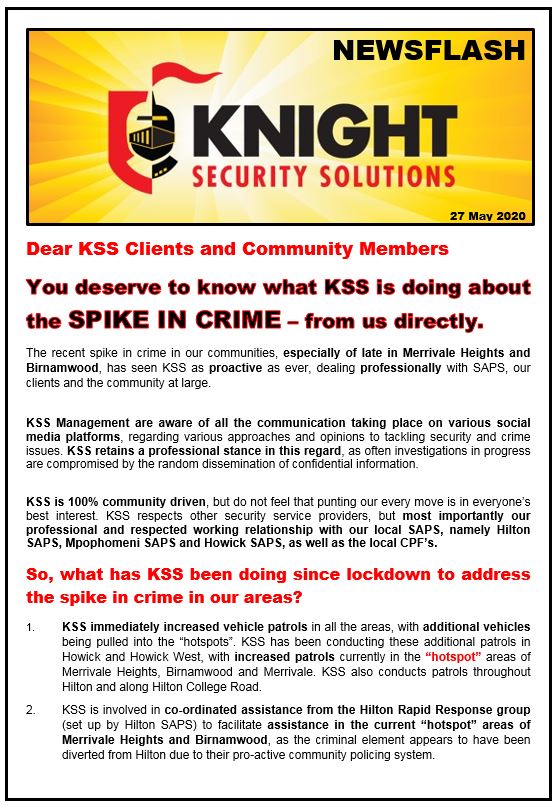 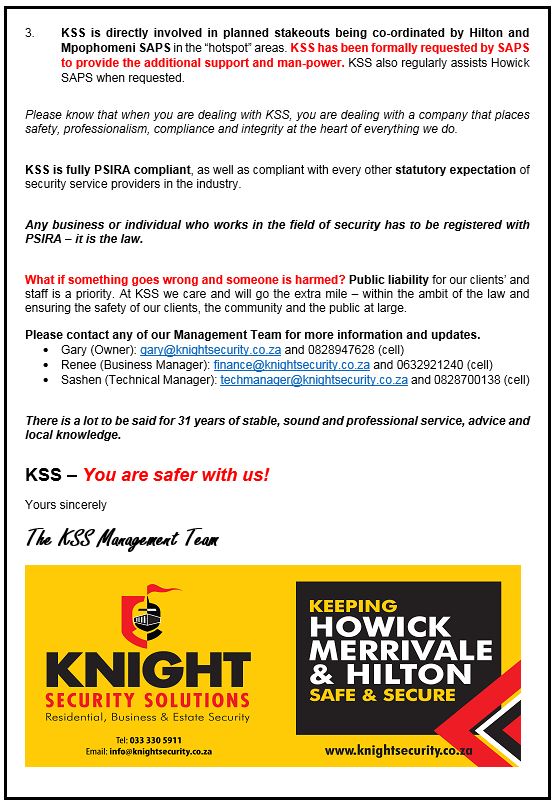