Security Advice
Think of security as having layers of concentric circles:
• Alarm in the house
• CCTV in and around the house (can be linked to your smart phone)
• Dogs
• Beams in the garden
• Perimeter fence or wall

YOUR HOME
• Shrubs and trees should be cleared away from the house, to avoid people hiding behind them.
• The house needs to have good quality burglar bars and good quality security gates.
• The house should have an alarm with panic buttons (fixed or remote) which are connected to a 24 hour monitoring security Control Centre.
• CCTV cameras could be placed at all entrances and can record any suspicious person on your property.
• A farmer must have a two-way radio system.
• Good quality pepper spray is very effective
• A very good quality bright torch.
• Dogs are valuable to have and alert you. A small dog is a good idea indoors and larger dogs outside.
• A safe room in the house where people could lock themselves inside. Some form of communication in this room would be beneficial.
• Close all curtains at sundown, so that nobody can see inside the house.
• Be VERY suspicious of unknown people who are asking for work OR want to buy/sell goods.
• Make sure you have the details of your domestic staff (Name, ID, contact number and address).
• Brief your domestic staff on security measures for their own safety as well.
• Brief your children (of ANY age) about safety and security. They need to know how to be proactive in a threatening situation.

ENTRANCE TO YOUR PROPERTY AND YOUR HOUSE
• Your property should be fenced with palisade or a concrete wall. Spikes or electric fencing could be on top of wall or fence.
• Bushes, shrubs, trees or anything which a person could hide behind, should be removed or trimmed.
• Lighting of dark areas is recommended.
• Ensure your gates are padlocked as automated gates are easily picked up off the rails and moved.
• On farms it is suggested that you have a monitored outer perimeter electric fence with an alarm and an inner perimeter electric fence with an alarm. The fence must be maintained.
• An automated gate is important so you don’t have to get out of your vehicle to open the gates.
• Keep a distance when stopping at your automated gate in case you have to leave in a hurry should something or somebody surprise you
• On a farm the road leading up to your property should be clear, with no bushes, trees and dongas so that no person can hide and you have a clear line of sight.
• Motion detecting beams could be used to surround the house which gives off a soft audible warning when the beam is broken.
• CCTV cameras allow you to monitor movement from the convenience of your smart phone.

Security measures are costly, but what are your family and your life worth?

ALWAYS HAVE THE TACTICAL ADVANTAGE
Do things that place you in a good position to avoid being attacked. When criminals attack they will always put themselves in a tactical advantage. They will know the area, how many cars are in the yard, how many dogs there are etc… They will know a lot about you!

GOLDEN RULE: KEEP YOUR DISTANCE AND ALWAYS HAVE AN ESCAPE ROUTE!

Regard everything that is out of place with suspicion.
(Supplied by Mr G. Larsen. Edited by D Preston)

House numbers
The Knight Security Solutions (KSS) Operations staff have reported to me that there are still MANY houses in the Howick, Howick West, Merrivale and Hilton areas that are still NOT NUMBERED. Please note that it makes responding to your premises by any emergency services significantly easier if your house is numbered clearly and is visible from the road. There has also been some recent theft of brass numbers from people’s properties.

Imposter
Residents in Merrivale and Howick have been approached by an Indian male claiming to work for the Umngeni Municipality or the Department of Water Affairs. This man claims that the resident’s accounts are in arrears and they need to pay him in cash. Please alert KSS or SAPS immediately if you have this situation.

School children accosted
On Friday 31 July three Howick High school students were approached by two black males and asked them to help carry boxes into HADCA opposite the High School. They boys at first said no but were then promised a R100 for their help. The boys were then asked if they had valuables, and if they did, what they were. The boys told the men they had cell phones. The two men told the boys they had to put stickers on to show security that the phones were not stolen from inside HADCA. A third black man joined them and he handed his phone over first. The phone was then returned very quickly to this third man with a sticker on. When the school boys handed their phones over the men started running away and jumped into a car that was parked around the corner. This took place between 4 and 5 pm.

Break-in
Another serious break-in occurred in Merrivale Heights over the past month. The same MO was used as in a previous housebreaking in Howick. The gate was derailed and then the suspects were in and out of the house within a couple of minutes, after forcing the front door and gate open. Numerous items were stolen. There are two options to trigger an alarm if your gate is tampered with. Both, however need to be activated remotely. Please contact the KSS offices for more information on 033 3305911 and ask to speak to Keshen or Sashen. Their direct numbers are: Keshen on 083 3935 265 or Sashen on 082 8700 138.

Installation of CCTV
Close-circuit television (CCTV) can be a significant deterrent for burglars. Having CCTV cameras recording all movement around your property 24/7/365 with the images displayed on either a monitor or TV - these images can also be streamed to smart phones and tablets - burglars can be deterred for fear of identification. It is also a good idea to have a camera installed at the front gate so that any visitors can be clearly viewed from the safety of the home. For advice please call Keshen on 083 3935 265 or Sashen on 082 8700 138.

KSS Officer foils remote jammers
KSS Armed Response Officer “Gunman” foiled two men who had “remote jammed” a car in Main Street on 21 July 2015. The suspects stole a laptop and cell phone from the vehicle, and were totally unaware that they were being observed. When the criminals returned to their vehicle they came “face-to-face” with Gunman who called for backup immediately. The men were arrested as they were found in possession of stolen items. Thanks to RTI, KSS back-up response and the Howick SAPS. The vehicle used by the criminals to commit the crime was a hired Hyundai with Reg no. ND 761808.

SA CAN at the KSS offices
Alicia and Teresa from SA CAN will be at the Knight Security Solutions office next month to assist with admin queries, app support and registration of new members.

The ladies will be unable to make house-calls, so anyone needing assistance must go to KSS at 2 Greenfields Place, Merrivale. For further information, please call 08 616 23646 during office hours.
Loadshedding
Eskom loadshedding has become a reality and affects all South Africans. Subscribers of Alarm Monitoring and Armed Response services are starting to encounter unavoidable issues related to loadshedding. Please note that these issues are industry related and ALL security service providers are affected.

The electronic security industry is faced with one of the worst challenges in its history. Eskom cannot guarantee that the electricity demand will be met in the foreseeable future. The sheer volume of alarm calls that arise during and after load shedding, is in some instances resulting in customer disappointment. Our KSS control centre works tirelessly during loadshedding as alarm activations increase by up to 1000%. Our Armed Response and back-up do their utmost to respond and check on each alarm activation timeously.

Please be patient as client safety and security is paramount. PLEASE DO NOT test your alarm system during loadshedding – this will result in KSS having to follow-up with your “false alarm” and may lead to a response time delay to an ACTUAL EMERGENCY.

Changing back-up batteries frequently cannot be over-emphasised. The battery of an alarm is the lifeblood of any security system that doesn’t have an alternative source of power when the electricity goes off.

Alarm users must take heed of this advice to ensure their own safety and security. It is YOUR responsibility to ensure that your alarm battery back-up is working. For advice please call Keshen on 083 3935 265 or Sashen on 082 8700 138.

Commercial / Business clients
There has been a recent spate of serious commercial crime and the organised gangs are now gaining access to premises through the roof. With this type of access, they are then not detected (unless there is a passive infrared beam PIR in the roof) and they are able to access the alarm control box (if it is located near the ceiling) and disable the system.
We need your co-operation in assisting us deal with this situation. Herewith is what we suggest:
1. Inform us if your control panel (a box with wires from the ceiling coming into it) is located near the ceiling. We need to move this box to a safer location.
OR
2. Install a PIR in the ceiling above the control box which will detect the criminal in the roof before he/she is able to cut the wires to deactivate the alarm.

There will be labour and equipment costs incurred to make these changes, but your safety and business sustainability is vitally important to us.
Tips for a reliable alarm system
Valuable information to ensure the effective working of your alarm system:
• Your alarm should be tested at least once a month. Please remember to do this between the hours of 9am and 3pm or after 7pm. Please notify our monitoring Control Centre beforehand, so they can set your alarm to ‘test mode’. If you discover your alarm is faulty, it is important that you then schedule a technical visit to check your alarm.

• Due to frequent power failures (load shedding) the alarm system batteries deteriorate quicker and therefore have a shorter life-span and capacity. Under load shedding circumstances, battery life is reduced considerably.

• The alarm system’s running time on the battery should be checked. This check is done by switching off the mains supply to the alarm system and determining how long the battery is able to keep the alarm active. If the system “dies” within 2 hours then the battery needs to be replaced. Please ensure that when you do this test, that you are home and able to monitor the batteries progress. Do not leave the house unarmed.

• Usually an alarm battery in good working condition can last up to eight hours without mains power. Factors that can affect battery life include the age of the battery, how many devices are linked to the panel, and the number of power failures or power spikes you have had in your area.

• With wireless equipment, the batteries should be checked every 12 months (by a technician) to ensure that they are still working effectively and are not damaged in anyway. Please do not open the wireless device yourself.

• If you have any outdoor alarm equipment, it needs to be checked and tested. Please ensure that there is no foliage growing in front of the detectors. This will result in “false alarms” and compromise the perimeter security of your property.

• Please ensure that there are no rats in the roof of your house or near any cables. Rats chew through cables which can render your system faulty.

• Have your entire security system serviced at least annually to ensure everything is in good working order. During a routine annual service call, the battery will be load-tested.

The largest security company in the Midlands - NATAL MERCURY: 15 April 2015 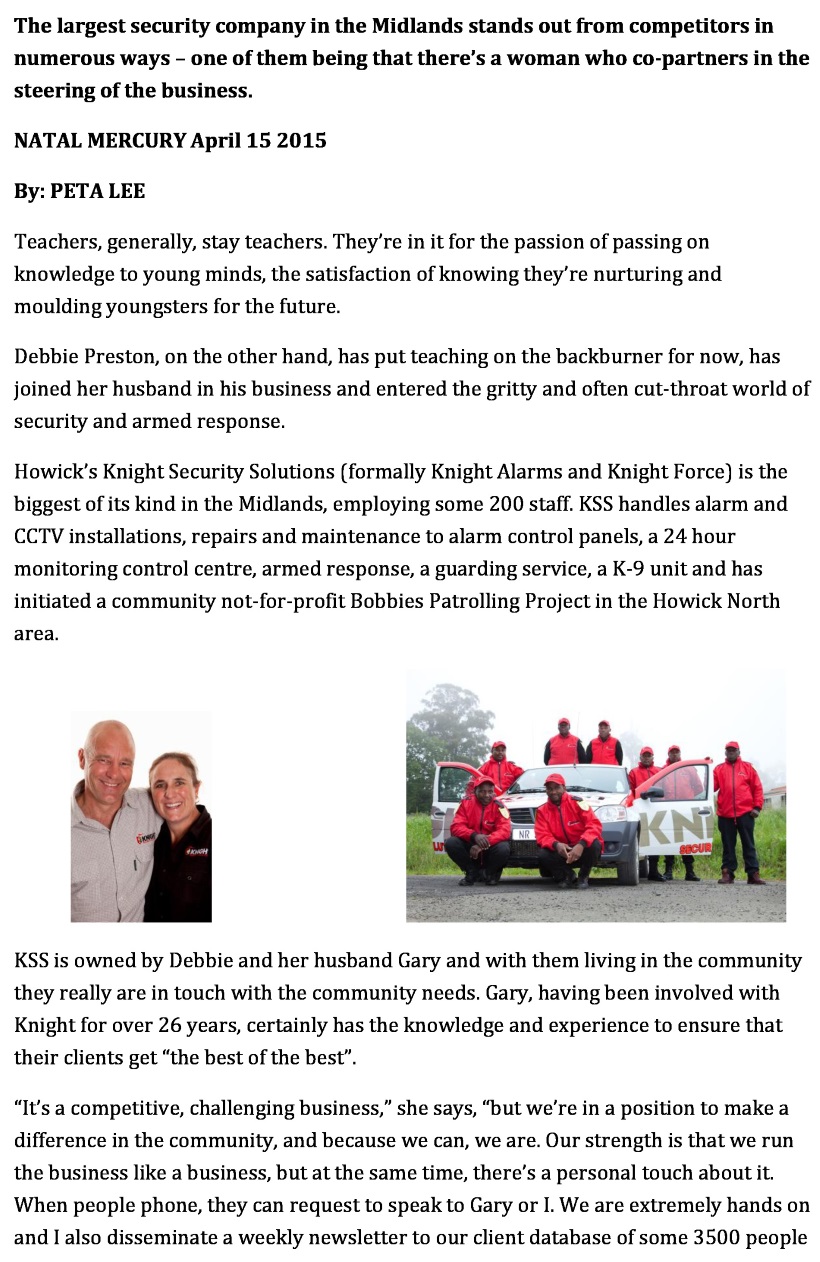 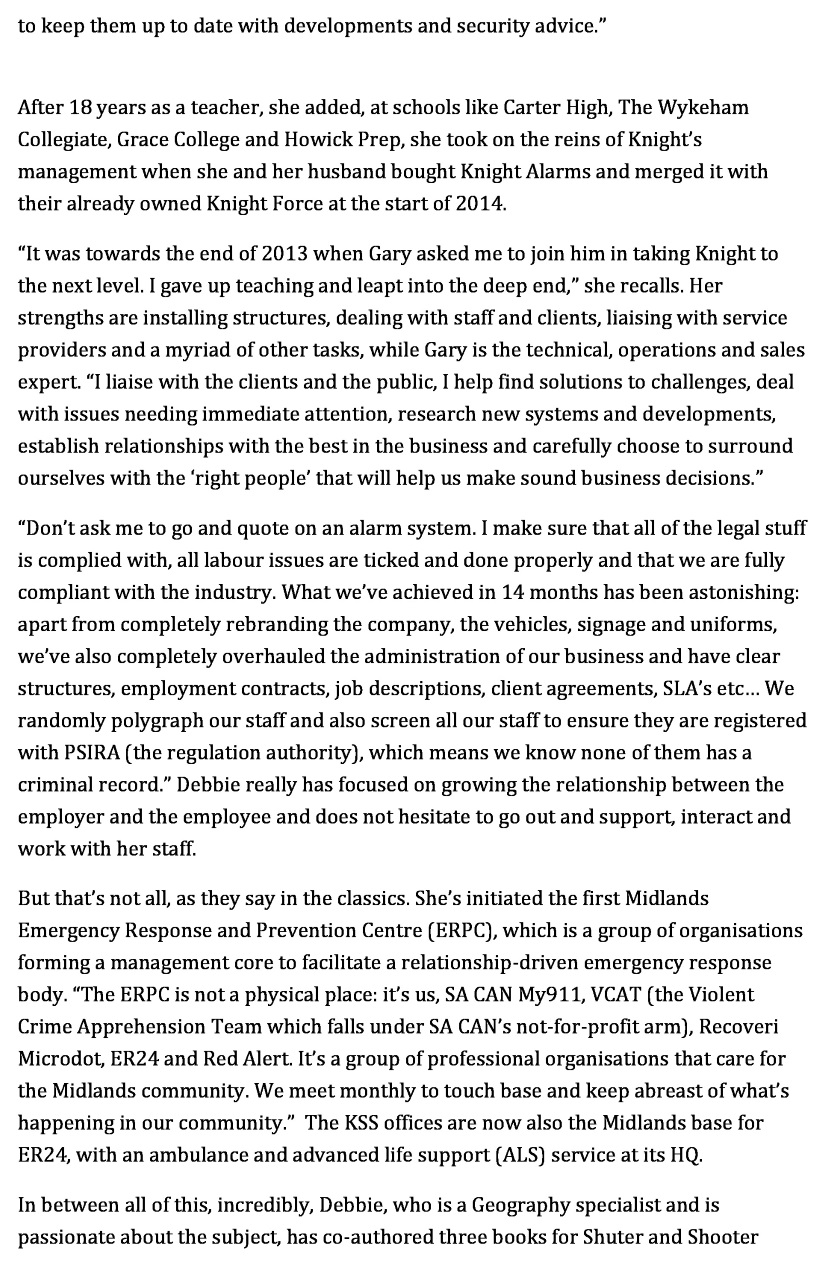 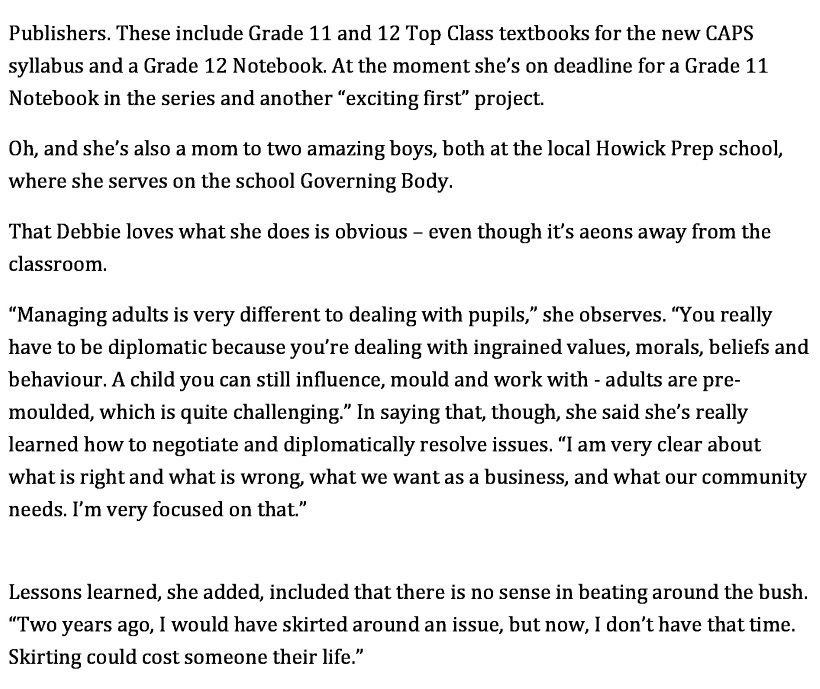 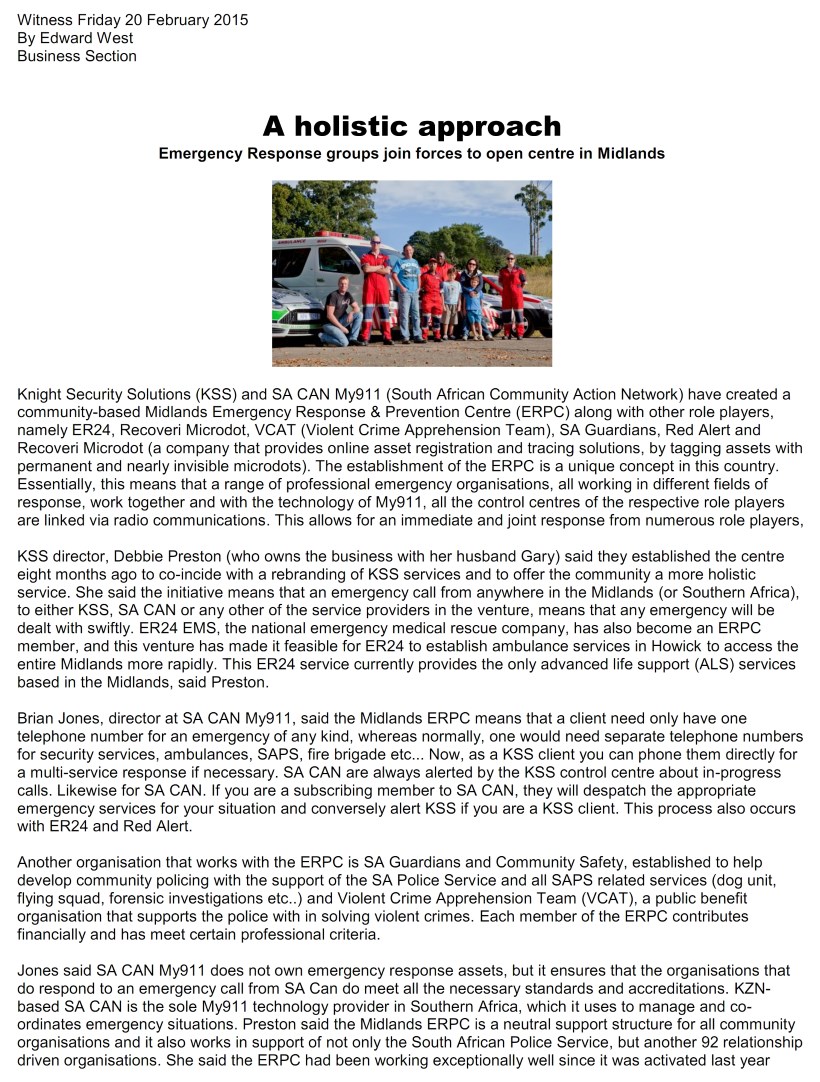