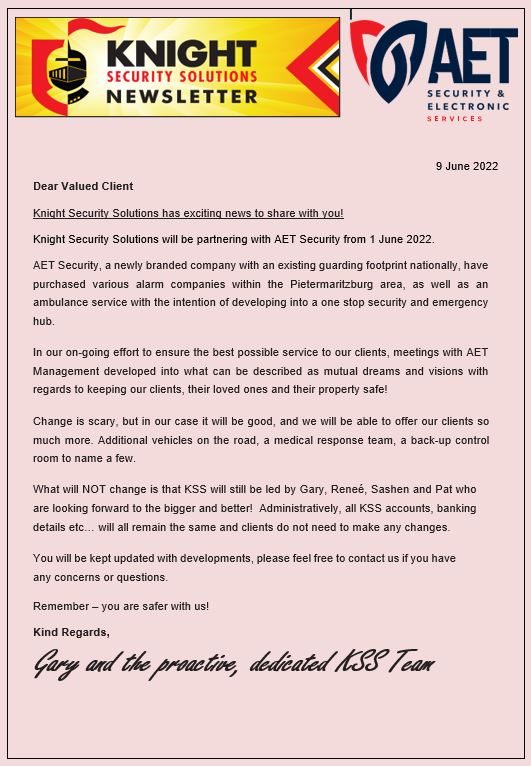 Please note that following are areas of concern with the recent crimes:
1. Water pipes being targeted.
2. Numerous quick in and out opportunistic crimes. PLEASE set your alarms.
3. Shoplifting.
4. Gate motors being tampered with, and gate batteries being stolen.

KSS Incidents 25 May – 8 June 2022
25 May 2022 23:12 Bisley (Pietermaritzburg) The KSS Control Room received a CCTV camera activation. Magma was dispatched to attend to the activation. Magma advised that the suspects fled when they noticed the Magma vehicle approaching. Nothing was stolen but property was damaged. Additional patrols were conducted in the area. SAPS were formally advised.

26 May 2022 05:46 Main Street (Howick) The KSS Control Room was advised that a shop window had been broken. A KSS Response Team was dispatched. The KSS Officers reported that they met the client on site. Items were stolen. SAPS were formally advised. A case was opened.

26 May 2022 11:01 Main Road (Howick) The KSS Control Room were advised that an electric fence had been tampered with. A KSS Response Team was dispatched. The KSS Officers reported that the top 5 strands of the fence had been damaged. No access was gained. Nothing was stolen. As per the client no need for SAPS.

27 May 2022 07:50 Harvard Street (Howick) A patrolling KSS Officer was advised that a gate motor had been tampered with. On further investigation it was established that the gate battery had been stolen. SAPS were formally advised. A case was opened.

27 May 2022 11:35 Riverview Road (Howick West) A patrolling KSS Officer noticed a gentleman in distress running down the road. On further investigation the KSS Officer was able to establish that the man’s shop had been robbed at gunpoint and he was chasing the suspect. KSS Officers assisted in searching for the suspect but to no avail. Money was stolen. SAPS were formally advised. A case was opened.